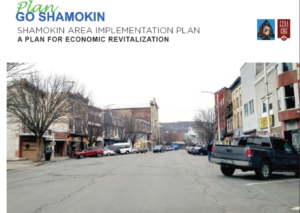 Congressman Dan Meuser has announced that Shamokin is receiving $2.675 million in federal funding for Revitalizing Independence Street. The funds, which are derived from H.R.2471 – Consolidated Appropriations Act of 2022, will allow Shamokin to execute their GoShamokin plan to improve the appearance and safety of Downtown Shamokin.

In total, Pennsylvania will receive $14.2 million in funds, which will be distributed to communities throughout the commonwealth.

The revitalizing Independence Street project is focused on complete street improvements that will greatly enhance the pedestrian-oriented and aesthetic appeal of the city of Shamokin’s “Main Street.”

The proposed improvements will be:
• Hardscape Improvement plans that focus on replacing the existing unit accent pavers, repairing any damaged concrete sidewalks, and upgrading ADA ramps and crosswalks.
• New crosswalk marking plans or crosswalk treatments (i.e. texture paving) will be prepared.
• A street tree planting plan will be developed.
• A streetscape amenities plan that includes replacing light fixtures, benches, trash/recycling receptacles, and vertical planters to provide additional greenery in place and in addition to street trees, depending on the location.

Independence Street is the city’s main commercial corridor and is located 2 blocks from the Sunbury Street/Route 61. The downtown benefits from not being a heavily trafficked through-put arterial roadway, making it more pedestrian-oriented and suitable for main street-type development.

The biggest barrier to pedestrian mobility in the downtown is the intersection crossings. Performing a makeover of Independence Street (which is located in a Federal Opportunity Zone and eligible Historic District) is an imperative initiative in the community to upgrade the downtown with a focus on ADA/safety and aesthetic improvements such as architectural lighting, planters, banners, etc. which will all have a major impact in supporting the influx of tourists, attracting new business to the downtown and creating better livability for the nearly 7,000 citizens of Shamokin.

This project is an implementation initiative based upon the GoShamokin Revitalization Plan, funded by a Keystone Community Grant, created by Stromberg Garrigan and Associates and adopted by Shamokin City Council October 2020.

The GoShamokin Revitalization Project responds to a special Shamokin community driven desire to proactively invent itself with fresh initiatives that will enable community members to revitalize itself with fresh initiatives by harnessing new opportunities, such as the recent influx in tourism through the introduction of over 8,500 acres of former coal lands in the Shamokin Area which now comprise the Northumberland County Anthracite Outdoor Recreation Area (AOAA). The AOAA is a family-friendly motorized and non-motorized recreation facility that attracts 30,000 visitors annually.

SEDA-COG’s Betsy Kramer, Revitalization Coordinator, said, “This is a much needed and appreciated influx of funds by Congressman Meuser to assist the City of Shamokin’s efforts to revitalize and create a safe, pedestrian-friendly downtown for its businesses, citizens, and visitors.”

“I first want to thank Congressman Meuser, Betsy Kramer, and former Mayor John Brown on behalf of everyone in Shamokin. I am truly grateful Congressman Meuser cares about Shamokin the way he does. These funds will go a long way in making our downtown more accessible for everyone with the ADA improvements, as well as beautifying the City,” said Shamokin Mayor Richard Ulrich.

SEDA-COG is a community and economic development agency in Lewisburg and is one of seven Local Development Districts in Pennsylvania. SEDA-COG enhances the quality of life and economic advantage for residents and businesses in the 11 central Pennsylvania counties through its vital partnerships and initiatives.