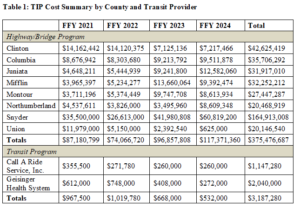 The adoption of the 2021-2024 Transportation Improvement Program (TIP) signals the successful completion of a year-long effort that engaged county officials, municipalities, transit operators, the Pennsylvania Department of Transportation, the Federal Highway Administration, other key stakeholders, and the public.

The TIP is the agreed-upon list of priority projects in the SEDA-COG MPO region. The program has a total of 229 projects to be addressed over the next four years.

“Despite the challenges presented by the coronavirus pandemic and constrained funding, this is a key update for the region because we continue to collaboratively advance and invest in the region’s transportation network,” said Jim Saylor, SEDA-COG Transportation Program director.

TIP projects are valued at $376 million over the next four years. State funding will cover 71% of the Transportation Improvement Program project costs, local funding match is less than 1%, while the federal funding level is at 28%.

Some of the major projects on the TIP include:

The TIP includes 23 local bridges ─ one in Snyder County, two in Mifflin County, three in Clinton and Montour counties, four in Columbia and Northumberland counties, and six in Union County. Additional new local bridge projects may be addressed through the TIP in the future, using cost savings or special initiatives.

The TIP also includes transit projects worth $3.2 million for Call A Ride Service Inc. in Mifflin and Juniata counties and Geisinger Health System for the LIFE Geisinger Program.

Below, Table 1 shows a funding summary for the SEDA-COG MPO region by county and transit operator for each of the four TIP years, listed by federal fiscal year. The final adopted version of the TIP is on SEDA-COG’s website at https://bit.ly/3ffqAAI.