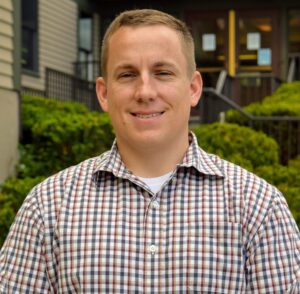 SEDA-Council of Governments (SEDA-COG) is pleased to announce that Tyler Dombroski, a 7.5-year staffer, is the new director of its Community Development program.

As senior program analyst in that program, he wrote and administered many Community Development Block Grant (CDBG) grants and projects, and most notably, has managed the $17 million Town of Bloomsburg Flood Mitigation Expansion project. Throughout the COVID-19 pandemic, he has led efforts to create the CDBG‐CV Economic Development program template utilized regionwide.

He also aims to continue the development of his team.

“Our department is a strong team that has faced significant adversity over the last year. I hope to continue our positive growth,” Dombroski said.

He appreciates the people, the beauty, and the culture of the region.

“Our region is comprised of salt-of-the-earth people, which is important to me. My family and friends live here and being close to them is also important to me. I think our region has a lot of natural beauty and history. I am also a big Penn State football fan, so I have to stay close to my alma mater,” Dombroski said.

“He shows a great deal of commitment and visionary outlook which will help to continue the department and agency adapt to the ever-changing work environment with the pandemic. We are very excited as Tyler has started his transition into the director role today, May 3. We look forward to the continued excellent work Tyler and his team provide to the region,” Wheeler said.

Dombroski has been mayor of Washingtonville since 2014 and was a councilman for two years prior. He has served on the Montour Area Recreation Commission since 2013, currently as chairman. He has been chairman of the Montour County Agricultural Land Preservation Board since 2016. He is vice chairman of the Washingtonville Municipal Authority and has been on the board since 2014. He serves on the boards of the Central Susquehanna Opportunities (since 2018) and the Jane E. DeLong Memorial Hall Association (since 2013).

He earned his Bachelor of Science Degree in Secondary Education Social Studies in 2011, and his Master of Professional Studies in Community and Economic Development in 2014, both from Penn State.

“We thank Teri for her oversight and commitment to not only the Community Development department but the agency over the last year-plus. Her continued hard work and dedication have helped to keep the department running smoothly. We appreciate her excellence,” Wheeler said.

SEDA-COG’s Community Development program administers 14 CDBG contracts for 28 communities. Over 35 years, the program has secured $120 billion for over 1,000 projects with its 11 dedicated staff.