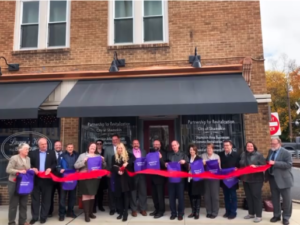 The public is invited to a ribbon cutting to mark the official opening of the office for the Partnership for Revitalization in Shamokin.

“Shamokin is experiencing a rebirth and a synergy. Our partners, along with many others, have recognized the opportunity in the Shamokin area to guide the city into a revitalization revolution,” Seigel said.

The Partnership for Revitalization is funded for three years through a $300,000 Keystone Communities Fund grant, thanks to state Rep. Kurt Masser (R-Columbia/Montour/Northumberland).

SEDA-COG is strengthening public and private investments by immersing itself in the community and offering its staff of 45 Economic Development, Community Development, Information Technology, and Housing specialists toward the effort.

Leading this effort is Betsy Kramer, SEDA-COG’s revitalization coordinator. She will staff the Shamokin office Mondays and Thursdays from 8 a.m. to 4:30 p.m. and by appointment.

“Exciting things are happening in Shamokin,” Masser said. “This partnership with SEDA-COG and Betsy’s presence in the downtown is exactly what was needed. Betsy will be able to focus on the revitalization efforts and provide the coordination needed to ensure Shamokin continues moving forward.”

Seigel said SEDA-COG is committed to the revitalization efforts.

“SEDA-COG has committed itself to guide, facilitate, and support the outstanding work of the many public and private groups and individuals who are committed to investing in Shamokin,” Seigel said.