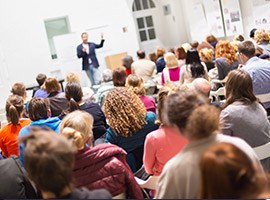 Bloomsburg’s flood mitigation system can now expand, thanks to a $2 million grant.

Before the Community Development Block Grant (CDBG) Disaster Relief funds were awarded, only 40 percent of the design for the town’s flood wall expansion project was funded. Now, this grant funds the final engineering design, permitting, property acquisition, and initial construction costs. Total project cost may be around $15 million.

The proposed project footprint is expected to be an almost mile-long levee system on the town’s southern edge along the Susquehanna River, and includes the Bloomsburg Area School District’s athletic complex, the middle and high schools, around 125 homes, 30 businesses of varying size, and the town’s public works and fire department. It also entails significant storm water and sanitary sewer improvements.

Bloomsburg Mayor Sandy Davis called the grant “great news,” and thanked all who made the grant come to fruition.

“We have been working diligently on behalf of our Bloomsburg residents to secure the funding for a flood wall that will protect homes, our school, and essential services,” Davis said. “At this time of Thanksgiving, we are truly thankful for the efforts of everyone who provided assistance in this next step toward full funding of Bloomsburg’s flood-wall project.”

“We are incredibly thankful to be awarded this critical funding which will help us to provide crucial protection to numerous residences and businesses within the Town of Bloomsburg. Flood protection has been a dream for Bloomsburg, and we are thrilled to see this starting to become a reality,” Martz said.

In an issued press release, PA Sen. John R. Gordner said, “This significant grant to the Town of Bloomsburg sets the stage for a major expansion of the current flood wall. I am very pleased that Gov. Tom Wolf and DCED Secretary Dennis Davin have agreed to support this crucial project for Bloomsburg.”

SEDA-Council of Governments’ (SEDA-COG) Community Development has been assisting the town in developing the project and prepared the grant application. SEDA-COG Project Coordinator Tyler Dombroski thanked the parties involved.

HUD allocated over $27 million to the Commonwealth of Pennsylvania through CDBG Disaster Recovery funds. These funds are allocated by DCED to Pennsylvania communities impacted by Tropical Storm Lee and Hurricane Irene in 2011.

This project expands on the almost $30 million flood wall that protects about 700 jobs in Columbia County and the former Windsor Foods site. It was dedicated in October 2016. At 1 mile long and up to 16 feet high, it is the largest public works project in the history of Columbia County. The height is 1.5 feet above the highest flood on record, Tropical Storm Lee of 2011, and 3 feet above the Hurricane Agnes level in 1972. Tropical Storm Lee cost Autoneum North America’s Bloomsburg facility over $60 million in damages.