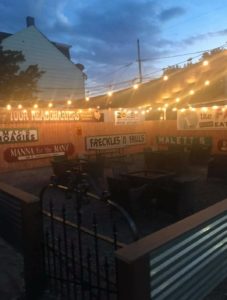 Shamokin restaurants and breweries want the public to know that even with the pandemic’s restrictions, they are open with outdoor and indoor dining options.

SEDA-Council of Governments (SEDA-COG), a community and economic development agency, has an office in Shamokin to coordinate revitalization efforts. SEDA-COG Revitalization Coordinator Betsy Kramer reviewed some restaurants’ outdoor seating expansion plans for the city to help ensure the aesthetics meet a revitalization plan that is being finalized.

“It’s a really cool vibe outside with plenty of atmosphere on our patio including signs from old Shamokin businesses,” Vetovich said. “It’s a destination.”

On display inside are vintage artifacts of days gone by of Shamokin like posters of a theater and a faux brick wall of the Fun Shop, a building that burned down several years ago.

She’s “born and bred” in Shamokin and a mural of her grandfather and her husband’s grandfather – both miners – is painted on her restaurant.

Vetovich started “rebuilding Shamokin one ugly building at a time” in 2014. She’s rejuvenated six buildings so far. The Heritage Restaurant was dilapidated, but she saw its potential in its tin ceilings and size. “It was an eyesore, but it had to be a gorgeous restaurant,” she said.

“I saw the demise of my hometown and I really couldn’t stand it,” she said. She wanted to stay and reinvest in the area where she knew people and people knew her.

One of the buildings she bought was the former Trinity Episcopal Church at 150 E. Liberty St. One of several offerings it will house is BAMSE Coffee and Roasters, a dog-friendly coffee shop. Its grand opening is 6:30 a.m. to 7 p.m. this weekend, Aug. 15 and 16. Regular hours will be 6 a.m. to 7 p.m. daily.

“This dog-friendly coffee shop is another opportunity for Shamokin to be a little distinct,” she said.

“We put the wings on the grill, and they taste like no one else’s,” said owner Ken Bethge.

Besides the bar inside, they offer a pared down menu of freshly made sandwiches, burgers, soups, baked beans, coleslaw, and more.

Their ice cream features unique flavors like Bittersweet, their version of chocolate chip. They top it with a decadent 14% butter fat.

“We melt chocolates together and dump them into the hopper. When it splatters into the hopper, it gets into little pieces and you get a lot of chocolate in every bite. It’s a unique chocolate with a unique taste and it’s delicious and rich,” Bethge said.

Their ice cream cake sales have increased because of people celebrating more at home, he said.

From March to June, he offered free breakfast to serve the people of Shamokin. He started by delivering milk to schools, then expanded it to serving food to anyone in need thanks to donations.

“I always knew there was good people in this town, but it really hit home when we did the free breakfast here when people came out of the woodwork and dropped food and cash off – including other businesses,” Bethge said. “I’m totally shocked what the Coal region and people out of the area did.

“I want to keep thanking everybody who has kept helping us throughout this. They keep coming here – we’ll deliver curbside or outside. People are still supporting us and I’m thankful and without people, we wouldn’t be in business,” Bethge said.

Love drew Bethge to the area. Originally from the Bronx, he met a Shamokin woman and moved to Trevorton. He bought Maurer’s in 1993.

Dennis Kaleta has poured himself and his family’s mining heritage into his business, the Lost Mined Brewing Company & Restaurant at 100 S. Market St.

His grandfather worked in the Shamokin mines and was a bootlegger. Some artifacts in the restaurant are from his family with many others from the area.

“Nothing is fake; it’s all actual items that were used in the area,” Kaleta said. “Some are from ruins; others were given by customers.”

His outdoor dining seating has a planter made with an old tin roof he found in the area. They offer live music every Sunday night, supporting local artists.

They have a 30-tap system they made themselves and plan on putting 20 of their own beers on tap starting before year’s end. They have freshly cut French fries and homemade sauces and dressings to complement their full restaurant menu.

He started out in the home-brewing business 18 years ago and wanted to add variety to the local market. Now, he wants to add to the city.

“I believe in rebuilding this city,” Kaleta said.

Covered Bridge Brewhaus & Taproom at 506 N. 8th St. also has outdoor and indoor dining. They offer about 25 new original beers a year like strubarb, a strawberry rhubarb beer; bragot made with local honey; cherry triple; and their flagship beer, coconut porter. They have 12 beers on tap along with wine from Kulpmont Winery, local spirits, and mixed drinks. Customers can take out beer in growlers, cans, and bottles.

“It’s my passion for beer and to try to create a European setting,” said owner Eric Kuijpers, who is originally from Holland. “My favorite beer is the next one; I always like to experiment.”

The Brewhaus has about 10 rotating food trucks that come and offer a variety of food like burgers, grilled cheese, BBQ, Mexican, and more.

It has three connected storefronts made into a taproom, a Speak Easy, and a parlor.

Originally from Neeritter in southern Holland, coming to Shamokin was “just a little adventure that turned into a longer stay,” Kuijpers said. “I started with some friends in the PA-Alers, a local homebrew club, maybe 15 years ago. I enjoy making different beers and sharing it with people.”