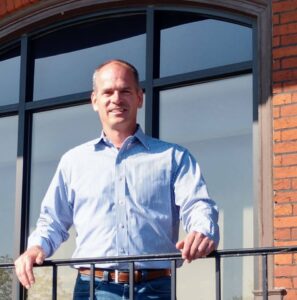 SEDA-Council of Governments (SEDA-COG) is pleased to announce that Steven Beattie is the new Executive Director of the SEDA-COG Joint Rail Authority (JRA.)

Beattie began his career as a project manager for area engineering consulting firms, including Herbert, Rowland & Grubic, Inc., where he managed the Lewisburg office. He later joined the Larson Design Group where he worked in a multitude of roles: Site/Civil Engineering Senior Project Manager, Retail Design Senior Project Manager, and the Director of Sales and Marketing. He most recently served as the Community Development/Grant Manager for the Borough of Lewisburg.

Since 1998, Beattie has served numerous roles for engineering consulting firms in the SEDA-COG region. Throughout his career he has served municipal, commercial, industrial, and institutional clients managing projects through the design, funding, and construction phases. His latest accomplishment includes leading the effort to secure over $3.4 million in funds for the Borough of Lewisburg over an 18-month period.

In addition, Beattie has obtained various licenses and certifications throughout the course of his career, including being a Notary Public, a Licensed Landscape Architect, and having received the Advanced Emergency Certification for the role of municipal emergency management coordinator.

Beattie’s major goals as Executive Director include preserving and expanding upon the legacy the JRA has built in our surrounding communities.

“My top priority, as I take on this role, is to continue the work started by the Joint Rail Authority dating back to 1983. In doing this, I plan to promote economic development in the region, ensure our industries have access to rail, and maintain our rail infrastructure to support our customers and their growth,” Beattie said.

SEDA-COG JRA Board President, Russ Graham, is excited to see what’s next for the Authority under the guidance of Beattie.

“The JRA has been extremely fortunate to have had Jeff Stover as our Executive Director for the past 37 years. His professionalism and knowledge of our rail system has been instrumental in countless economic development and railroad upgrade projects over the years. Jeff will be difficult to replace, however we are confident in Steven, and we look forward to working with him as we move into the next chapter of the JRA. Steven’s background in the engineering field and his experience in intergovernmental relationships will be a huge asset to the JRA,” Graham said.

Beattie earned his Bachelor of Science degree in Landscape Architecture from West Virginia University’s College of Agriculture, Natural Resources, and Design. He later went on to earn his Master of Business Administration (MBA) from Bloomsburg University of Pennsylvania’s Zeigler College of Business.

Beattie stressed the role that rail plays in the overall success of our area.

“I have always been a proponent of economic development in our region, whether that is through small businesses in our downtowns, tourism, or large manufacturers. Rail served industries in our region provide family sustaining employment opportunities for our hardworking, educated, and skilled workforce. The JRA’s role in maintaining and growing rail service in the region is critical to the success of these businesses and our regional economy,” Beattie said.

The primary mission of the JRA is to preserve essential rail freight service and to further economic development and job creation in the region through improvement and expansion of rail infrastructure. Since the inception of the JRA, the Authority’s presence has grown from five counties to nine (Centre, Clinton, Columbia, Lycoming, Mifflin, Montour, Northumberland, Snyder, and Union.) The 80 miles of rail line it preserved through the North Shore and Nittany & Bald Eagle lines has grown to 215 miles with the inclusion of the Juniata Valley, Lycoming Valley, and Shamokin Valley railroads, and an extension of the Nittany. The dramatic success of the Authority’s short-line railroad system has been cited in national publications and by distinguished organizations at every level, private and public.